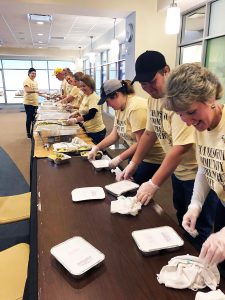 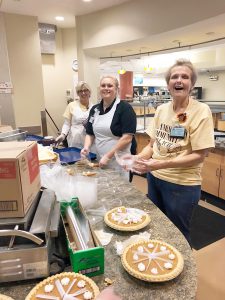 For the fourth year in a row, UPMC Western Maryland partnered with several organizations to ensure that thousands of area residents enjoyed a delicious Thanksgiving dinner.

Along with Our Lady of the Mountains Roman Catholic Parish, Mineral County Aging and Family Services, Allegany County Human Resources Development Commission and The Pharmacare Network, UPMC Western Maryland teamed up to serve over 2,800 meals across the tri-state region.

“This year’s event was extra special as we delivered so many meals in Allegany and Mineral County,” said Jo Wilson, Vice President, Population Health at UPMC Western Maryland. “Our goal was to provide these Thanksgiving meals by working with our partners in the area. The UPMC Western Maryland staff as well as our volunteers are amazing and brought smiles to so many people.”

The number of meals prepared this year marked a new record, with 1,383 dinners consisting of turkey, stuffing, mashed potatoes, cranberry sauce, rolls and pumpkin pie being delivered out into the community. Meals went to churches in Frostburg, Westernport and Mt. Savage, to 13 different group residential communities in the area, to Mineral County Meals on Wheels clients and to home bound seniors.

Flu shots were also made available, with 15 being administered in the local high rises and 43 more at UPMC Western Maryland during the dinner.

“Without a doubt this is one of the most rewarding projects we do because it reminds us of what a hot, nourishing meal means to people,” Wilson said.