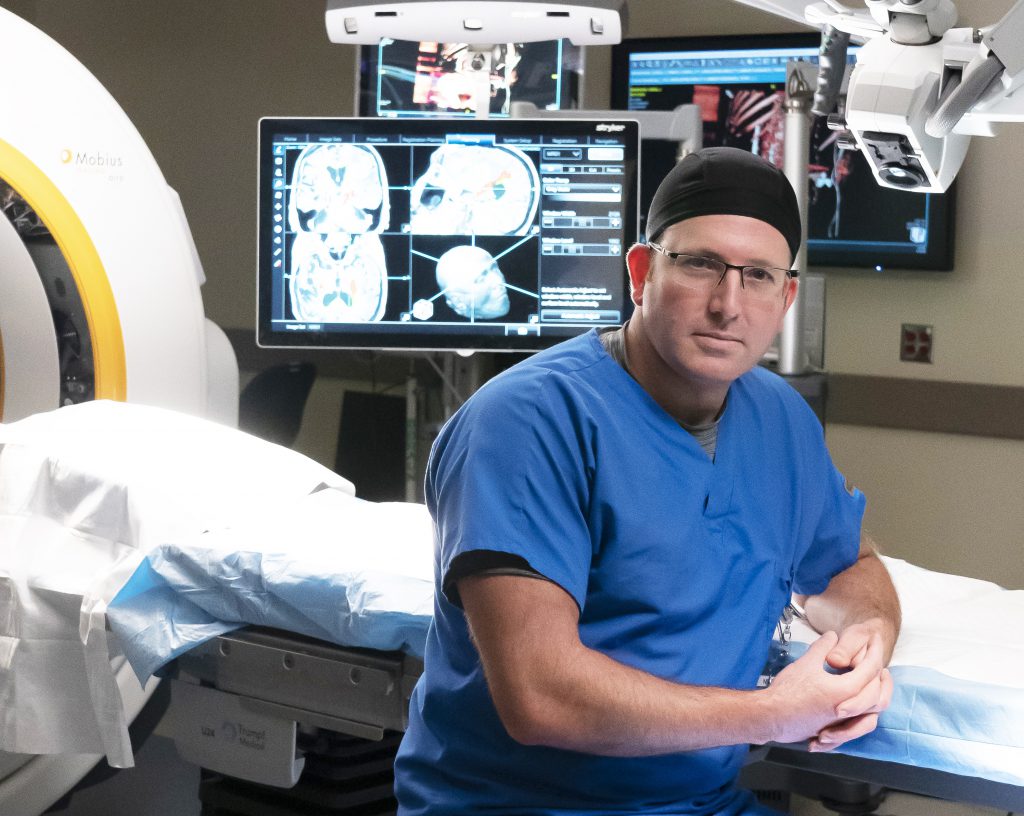 In the unbelievably complex world of spinal and brain surgery, UPMC Western Maryland neurosurgeon Dr. Or Cohen-Inbar sums up his intricate and deliberate work in three simple words: “Time is brain.” Thanks to the recent acquisition of cutting-edge technology in the hospital’s neurosurgical operating theatre suite, operations now involve considerably less delay, and the lives of patients are being positively impacted nearly every day as a direct result.

Since being launched together in early July, UPMC Western Maryland’s new AIRO intraoperative CT scanner and Stryker spine navigation system have provided the neurosurgery team a plethora of new options and abilities that few neurological operating room suites in the country can match.

The AIRO, a full, true, 32-slice CT scanner is “unlike other devices used for spine navigation such as Stryker Zim or Medtronic O-arm. It is not merely a sophisticated biplanar X-ray,” Dr. Cohen-Inbar said. “It allows for the highest quality diagnostic images of any part of the brain or spine. Based on vendor reports, there are only four such combined comprehensive systems like this in the entire United States. There are only about 200 AIRO CT scanners worldwide, and while every operating room has a navigation system, it is very rare to have both working together like we have here.”

The need to acquire the AIRO began with a desire to provide better imaging data for larger patients. “The bigger the patient, the lower the quality of the X-ray,” Dr. Cohen-Inbar said. “Regardless of the sophistication of the navigation system, its functionality is always based on the quality of the image it is given. We knew we needed to find a way to provide the highest quality image possible.”

The acquisition of the AIRO came after extensive research. “We checked every system available on the market,” Dr. Cohen-Inbar said. “With the exception of the AIRO, the other systems are all basically biplanar X-rays that do not provide a solution for larger bulky patients.

“In such patients, image quality and X-ray penetration become the rate-limiting step. If the initial image quality is poor, any other computer processing based on it is compromised, and the efficiency and safety of the spine neuronavigation is uncertain.

“We needed higher quality imaging data to provide a higher fidelity reliable spine navigation,” Dr. Cohen-Inbar said. “Fortunately, Stryker acquired AIRO about a month before we started our search. We were one of the first institutions to have both systems, which allows the CT scanner to ‘speak’ directly to the navigation system.”

Now, the AIRO and Stryker make up a key component of bolstering the neurosurgical operating room suite’s power as a smart room. “We can control every aspect of the room, including lighting, screens, projectors, and additional equipment like a microscope from a central control panel,” Dr. Cohen-Inbar said. “There is also a specialized robotic bed uniquely designed for the AIRO constructed out of carbon, making it fully X-ray and CT translucent. It allows for imaging for virtually any body region in any position.”

Once the patient is brought in and the pre-operative CT scan is performed, it is automatically sent to the navigation system. Then, in 3D stereotactic neuronavigation, Dr. Cohen-Inbar orients himself. After the surgery is completed, another CT scan may be performed on the same patient, validating the accuracy of any hardware placed in relevant cases.

The equipment is all operated by trained staff. Four or five dedicated OR team members work with the neurosurgeon during a procedure, as does a second layer of support staff that includes representatives of the different companies involved in the construction of the operating theatre.

All of this technology is geared toward one goal: better results. “The biggest advantage of these tools is their versatility,” Dr. Cohen-Inbar said. “The whole point of doing this was to serve our community to the best of our ability. All of this technology and these extra services we can provide culminate into one thing: better patient safety and better outcomes.”

One such outcome involved in a particularly difficult case earlier this summer. “We had a patient involved in a devastating motor vehicle accident,” Dr. Cohen-Inbar said. “There are some warning signs with patients like this that indicate impending death. The initial CT scan showed very serious traumatic brain damage to the extent of being unsalvageable. We did tests that indicated the patient was virtually close to being brain dead, and though clinically there was every indication there was nothing that we could do, I couldn’t bring myself to that conclusion. I went in for a Hail Mary.”

Though there was nothing that could be done about the damage that the traumatic injury did to the patient’s brain, the main issue that was causing the most risk to the patient’s life was brain swelling. “We performed a decompressive craniectomy, a procedure that was developed 60 or 70 years ago, in which you remove almost half of the skull to make room for the brain,” Dr. Cohen-Inbar said.

“This was done simply to allow the patient to remain alive and allowing for brain recovery. After we did that procedure, we went ahead and did a brain CT scan on the AIRO. I saw that the side we operated on looked well decompressed, but because of the decompression and the brain shift, a new brain bleed developed on the other side.

“We then immediately turned the patient and operated on the other side of the brain. The delay from development to diagnosis and to treatment was only a matter of moments.”

In typical setups, assuming everything is vacant and ready for the patient, getting an intubated patient from the operating room to the CT scanner takes about an hour. This is related to the challenges, equipment and personnel that are involved in the transport. “In this case, because we have the AIRO, it took us five minutes, and that is the whole point of this,” Dr. Cohen-Inbar said. “We were able to operate on both sides of the brain, when without it we would have missed the brain bleed on the other side, only to catch it later in a delayed scan.”

The patient, currently still recovering, is alive today because of the AIRO. “The patient has a long, long road of recovery, but is still around to fight,” Dr. Cohen-Inbar said. “The patient is taking baby steps forward every day. The entire UPMC Western Maryland staff involved in this patient’s care is rooting for them.”

The case above is just one of many positive impacts that have occurred since the AIRO and Stryker system launched. “Working together, these new tools offer a system of checks and balances that give us an opportunity to have the best possible outcome,” Dr. Cohen-Inbar said. As a result of the functionality of the new equipment, the neurosurgery operating room suite is one of the busiest places in the hospital. Operations occur nearly every day.

While the AIRO and Stryker are pushing neurosurgery to new heights, Dr. Cohen-Inbar has already made arrangements for the next addition to the OR suite, and this time the new equipment he has secured is not just rare, it is unheard of.

“Currently there is no system that allows the Stryker navigation system to work with neurophysiology checkpoints prior to spine instrumentation,” he said. “We reached out to every major company that develops spinal fusion equipment. None of them had the equipment that can superimpose the accuracy of the navigation system with the independent validation of neurophysiology. We found a small Israeli company to make this instrument specially for us and it arrived very recently.”

With all of this equipment advancement comes added responsibility and a push for UPMC Western Maryland to continue to be a trailblazer in neurosurgery. “To fully utilize this equipment, we have to adapt our procedures and our equipment to work together,” Dr. Cohen-Inbar said.

The impact the new equipment is having, and the upward trajectory of the program is not lost on Dr. Cohen-Inbar. “I’ve worked in big institutions both in the United States and abroad,” he said. “Our small, boutique hospital now has one of the best neurological suites in the country.”