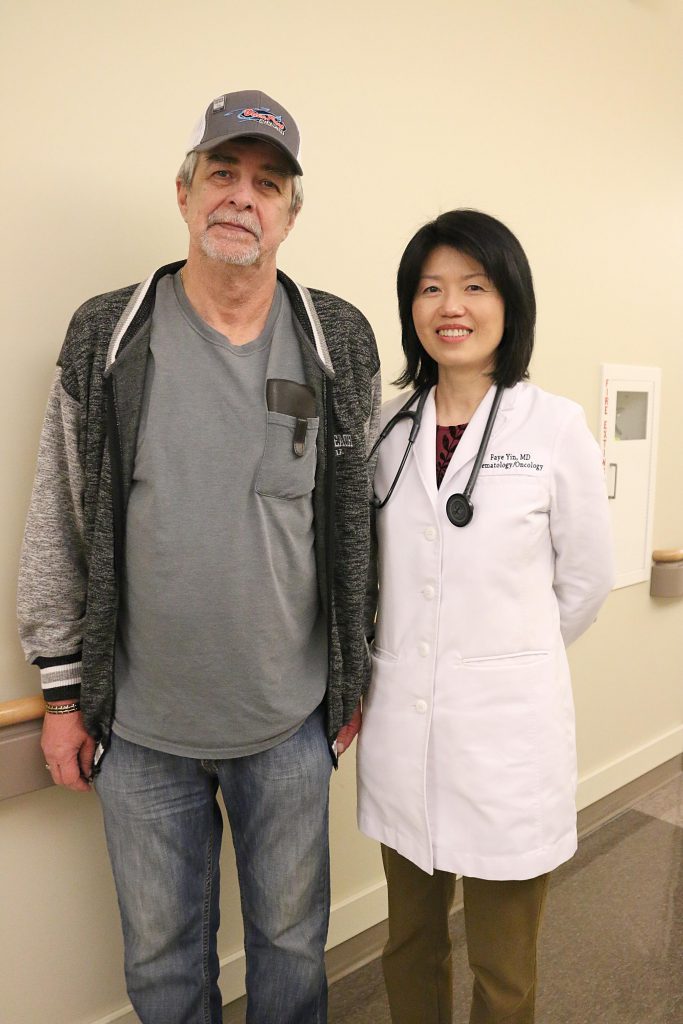 Gene Drees, Finzel, with his doctor, Medical Oncologist Faye Yin. “These drugs are lifesaving, and Gene is one of the best patients I’ve ever had. He quit smoking, and he’s been very honest. I tell other patients about his story. We are going to keep him around so we can keep bragging about him.”

UPMC Western Maryland’s Schwab Family Cancer Center is one of 700 institutions around the country participating in a cutting-edge clinical trial that is making a difference in the lives of lung cancer patients both regionally and across the United States.

The Lung-MAP clinical trial is a cooperative group study sponsored by the National Cancer Institute. The Schwab Family Cancer Center has enrolled 12 patients for the study. Clinical trials like Lung-MAP involve studying new treatments and medications in an effort to get them approved for use.

Clinical Research Coordinators Mickie Seletyn and Barbara Wood have front-row seats to the doors that trials like Lung-MAP can open for cancer patients.

“Lung-MAP is a study for advanced non-small-cell lung cancer patients who are in Stage IV and have undergone treatment which failed,” Mickie said. “Once they have failed their first therapy, they are eligible for the Lung-MAP study.

“The trial involves molecular profiling. I tell patients it looks at their cancer and determines what kind of personality it has. It looks for specific mutations which could respond more favorably with different options of treatment other than chemotherapy. The medications are targeted therapies, and one way to describe it is like using a rifle instead of a shotgun. They target the cancer cells, causing less damage to healthy tissue.”

The Lung-MAP trial is unique because it was the first trial designed to have a master protocol and then several sub-protocols that can be opened and closed as one fills up. If a patient is in one sub-protocol and it works for a while but then stops, they can be moved to a new protocol without starting completely over.

“Clinical trials are optional,” Barbara said. “The patient may decline participation at any time. The decision to participate is made in consultation with the treating oncologist. Most of the time our patients are honored to be asked to participate. They are selfless. Everyone has the attitude that if they can help someone else by participating in the study, they are doing some good.”

Trials like Lung-MAP have been provided as options at the Schwab Family Cancer Center since 2007. That year, five Schwab Family Cancer Center patients joined 10,000 other patients around the country in a very important breast cancer trial designed to determine which patients could be safely treated without chemotherapy. After nearly 12 years, the trial findings were finally presented at a national oncology conference, and now there are new options because of these patients.

“The benefit of having the clinical trials here at UPMC Western Maryland is very clear. Our patients can take advantage of whatever new drugs are out there,” said Dr. Blanche Mavromatis, Medical Director, Oncology Clinical Trials. “We are very excited about the Lung-MAP trial. It’s very cutting edge and, as a result, progress is being made and fewer people are dying from lung cancer. We still have a lot of progress we need to make. It’s important to note that these trials are constantly changing with the times and technology. There are new drugs constantly being added to the different sub-protocols of the Lung-MAP.”

Lung cancer is the most common kind of cancer in the region UPMC Western Maryland serves, and parallels data nationwide. “It’s second only to prostate cancer in frequency for men and breast cancer for women,” Dr. Mavromatis said. “It is very common, and, unfortunately, we have a population here that is at risk. It’s a difficult disease and there is unmet need we are happy to help fill through our clinical trials.”

The trial has been beneficial for a number of patients, including Gene Drees of Finzel, Md. A lifelong smoker, Gene was diagnosed with Stage IV lung cancer in 2016. “They told me if my regular treatment did not work that I was a candidate for the trial.”

Though Gene’s treatment appeared to work initially, his cancer came back, and so he was administered 48 doses of immunotherapy as part of the Lung-MAP trial over the next two years.

“I knew right away I was going to try it,” he said. “My breathing was impacted to the point where I had to be on oxygen, and I was in a lot of pain.”

Now three years removed from the start of his participation in the trial, his condition has stabilized to the point where he can enjoy traveling with his family and fulfilling his duties as a self-described full-time grandpa.

“I’d tell anyone thinking about participating to go for it,” Gene said. “Don’t give up and keep a positive attitude. I can pretty well do everything I used to do again; it just takes me a little longer and it makes me more tired.”

Gene’s doctor, Medical Oncologist Faye Yin, said she was pleased he took the opportunity to participate in the Lung-MAP trial. “These drugs are lifesaving, and Gene is one of the best patients I’ve ever had. He quit smoking, and he’s been very honest. I tell other patients about his story. We are going to keep him around so we can keep bragging about him.”

As the Lung-MAP trial continues to develop and progress, so too will other trials that will one day lead to lifesaving treatment. Currently at the Schwab Family Cancer Center, a total of 30 active studies are under way involving all kinds of cancers.

“Every treatment that we have to treat cancer was in a clinical trial at some point,” Mickie said. “Everything is changing so quickly. Our doctors do an amazing job of keeping up to date with new clinical trials and treatment protocols. They are very good at what they do.”

While scientific proof of the success of the trials may take years to be published, Gene’s wife, Debbie Drees, sees the value of trials like Lung-MAP every day. “When they first mentioned the word cancer, I cried my eyes out thinking I was going to lose him,” said Debbie. “Now, I’m more positive, and know he’ll be around for years. I don’t know what I would do without him. We couldn’t ask for better people to take care of him. It takes special people to do this job.”