May is stroke awareness month at WMHS

Simply put, a stroke is a brain attack. It can happen to anyone at any time. It occurs when blood flow to an area of the brain is cut off. When this happens, brain cells are deprived of oxygen and begin to die. When brain cells die during a stroke, abilities controlled by that area of the brain – such as memory and muscle control – are lost.

How a person is affected by their stroke depends on where the stroke occurs in the brain and how much the brain is damaged. For example, someone who had a small stroke may only have minor problems such as temporary weakness of an arm or leg. People who have larger strokes may be permanently paralyzed on one side of their body or lose their ability to speak. Some people recover completely from strokes, but more than two thirds of survivors will have some type of disability.

The statistics for strokes are eye-opening:

Recognition of a stroke and calling 9-1-1 will determine how quickly someone will receive help and treatment. Getting to a hospital rapidly will more likely lead to a better recovery. The F.A.S.T. system is an easy way to remember and identify the most common symptoms of a stroke. F stands for FACE. Ask the person to smile. Does one side of their face droop? A stands for ARMS. Ask the person to raise both arms. Does one arm drift downward? S stands for SPEECH. Ask the person to repeat a simple phrase. Is their speech slurred or strange? T stands for TIME. If you observe any of these signs, call 9-1-1 immediately and note the time of the first symptoms. This information is important and can affect treatment decisions. 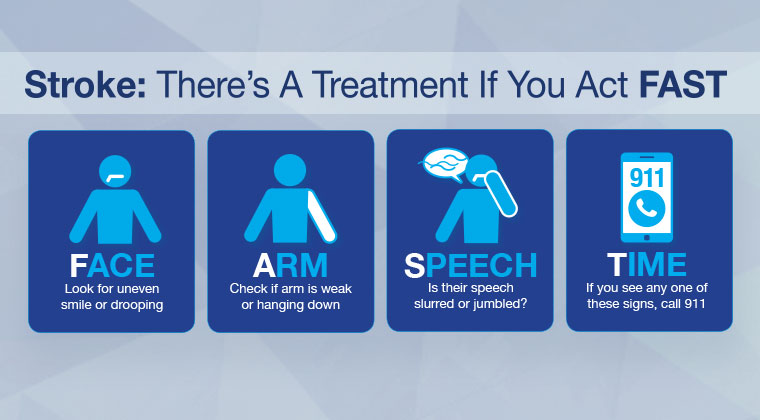 Sometimes other symptoms appear, separately, in combination or with the FAST signs. Knowing the signs and symptoms of a stroke is the first step to ensuring medical help is received immediately.

For each minute a stroke goes untreated and blood flow to the brain continues to be blocked, a person loses about 1.9 million neurons. This could mean that a person’s speech, movement, memory and much more can be affected.

UPMC Western Maryland holds both the Get With the Guidelines Gold Plus Achievement Award for stroke, as well as the Target Honor Roll Elite Award – both awarded by the American Heart Association.